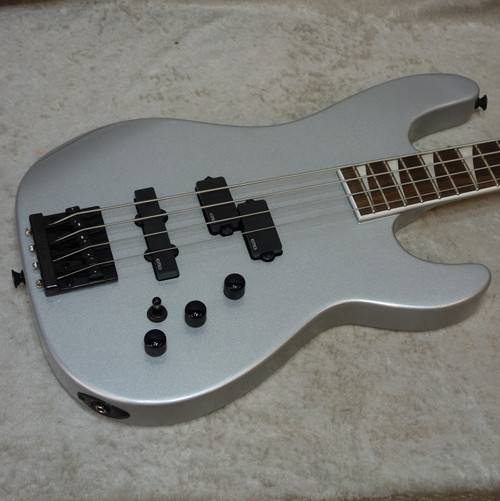 Don't get stuck waiting at the back of the line! We order all new Jackson products early to ensure you get your guitar as fast as possible!

It has been three decades since Megadeth’s acclaimed Rust in Peace took the music world by storm, with David Ellefson’s intricate bass skills and unparalleled playing style cementing the record as one of the finest thrash metal albums of all time.

The poplar body features ergonomic contours that provide the perfect platform for launching a musical assault—the upper contour provides a comfortably stable anchor for pick or fingerstyle playing alike while the lower contour provides perfect balance when propped on a knee for monitor stands. The through-body quartersawn maple neck features a scarf joint and graphite-reinforcement rods that protect against extreme environmental and climate changes. Built for highly technical lightspeed playing, the 12”-16” compound radius laurel fingerboard flattens out as you move up the neck for increased playing comfort and speedy articulation.

A force to be reckoned with, the X Series Signature David Ellefson 30th Anniversary Concert™ Bass CBX IV displays Jackson’s distinctive style with an eye-catching Quicksilver finish, all-black hardware, including everything from the bridge to the Jackson sealed die-cast tuning machines, pearloid sharkfin neck inlays and Jackson’s signature pointed 4-in-line black headstock headstock with black "Radiation" logo and Ellefson's signature on the back.

Please E-mail or call with any questions.