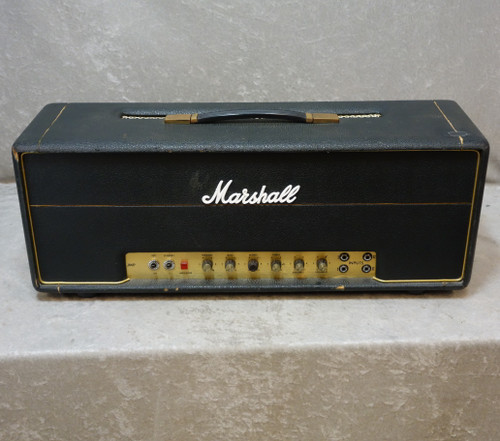 For your consideration is a vintage 1974 Marshall Super Lead Mk. II 100 watt all tube guitar amp head. This one is very much the real deal, has been very well taken care of over the decades, and is ready for a new home! This amp was gigged in the 1980's but hasn't seen any shows for decades. It was kept in a smoke-free environment, and has been excellently maintained for a very long time.

Cosmetically, the amp is in really good shape for its age. A few nicks and dings in the Tolex, one of the previous owner's preferred settings marked on the faceplate, some scuffs here and there. Nothing outside of the standard mojo.

As far as the sound of the amp goes...it truly has "that" famous Marshall sound; warm, smooth and harmonically complex. With modern, safe & affordable attenuators, you can easily get cranked, overdriven, authentic Marshall vintage tube tones at bedroom volumes making these amps more practical, useful and sought after than ever before. From clean to mean, this one does it all in spades

The quality of the tubes, specifically the preamp tubes, are the unsung heroes of the amp's voice...the special sauce. Transformers are original.

For years, the amp had routine care and preventative maintenance by Casey Gooby, one of the best amp techs in the state.

One of the owners of the store is very much a seasoned Marshall aficionado, and has a tuned ear from over the years of playing them. It took only a few seconds of playing before he stopped and said, "yep...that's it."

Lastly...we will be double boxing and insuring the amp for shipment.